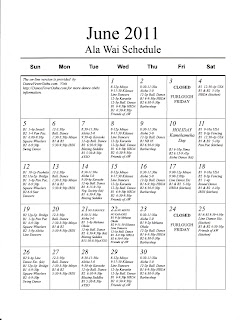 Thank you again, KI, for posting the June 2011 Palladium Schedule. Guys and gals, if you want to know more about what's gonna happen this month, then go ahead and surf over to KI's http://DanceFeverOahu.com. He's the go-to guy who has more fingers on the pulse of upcoming events on this island. SHAKA, BRO!
(Left click on schedule to zoom in)

And no forget the big happenings this month........

June 25: Hawaii Swings 2011 with Buddy Schwimmer Workshop at the Palladium

For more info, please scroll down to previous blogs.
Posted by Frank at Tuesday, May 31, 2011

Another Venue For Tuesday Night Dancers

Divino Ritmo's Social Dance at the Cupola, May 31st!

Aloha to all end-of-the-month-midweek dancers. Just got this e-mail from dear friend Marie Laderta. If you got dancing shoes and will travel, Divino Ritmo is hosting their last Tuesday of the month dance at the Cupola on the 31st.
Frank

Michael Yap will be guest DJ-ing for us at next week's social dance at the
Cupola!

Dance to the tunes of Michael Yap who will be guest DJ at Divino Ritmo's
social dance next Tuesday, May 31st at the Cupola, (2nd floor, Honolulu
Design Center, corner of Piikoi & Kapiolani), from 7-10pm.

Admission is FREE.
Food and beverage are available for purchase.

Those of you who know Michael's music know that he plays only da best!!!!
Come join us!

Lucas & Yanna
divinoritmo@aol.com;
Yannajs@gmail.com
Posted by Frank at Saturday, May 28, 2011

Aloha Students of Dance,
I have forwarded to most of you on my mailing list an invitation to a social dance at Hale Ikena (Ft. Shafter) from dance instructor Lynn Nakamura. Please contact Lynn if you plan to attend. Security at the military location is strict. So if you are going to the social dance, please bring your Driver's License (for ID including ID for all occupants on your car) and automobile insurance card.
Frank

You are invited to a social dance on June 2. We want to thank our instructors and students for making our first dance session so successful and we want to make it a fun night for social dancing, eating and just socializing. We are inviting some of our friends from the other clubs too. You can invite your friends too.

Thursday night, Hale Ikena has a Mongolian Bar-B-Que dinner for 65 cents an ounce which starts from 5pm. You select the items you want and the chef will cook it. It comes with either white rice or brown rice, or noodles, and ice cream.
If you prefer, instead of the dinner, you can purchase a salad or sandwiches, etc. from Mulligan's (adjoining to Hale Ikena).

The banquet room will be open from 5pm so you can just pick a seat (table of 10) and go into the next room to purchase your meals if you want to eat. You don't have to purchase anything since it's just a social dance. We plan to have 2 - 3 very short exhibitions and will introduce our instructors. There will be general dancing & socializing & eating. It's going to be very casual & fun.

Let me know if you plan to come and if you plan to eat. We are trying to get a headcount so we can be sure to have enough table seating for those that want to eat and chairs for those who are not eating.

You can either email, call, or text me. 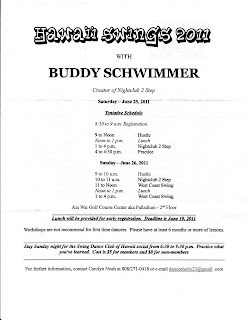 Aloha Students of Dance,
If you're longing to learn the HUSTLE, or NIGHTCLUB 2 STEP, or WEST COAST SWING from the "King of Swing", here's an early tip. Buddy Schwimmer, better known as the "King of Swing" is headed our way for a two-day workshop at the Palladium in June. For the younger generation, he's better known as the papa of Benji (So You Think You Can Dance), and Lacey (Dancing With The Stars). Carolyn Noah is spearheading this event. So if you got the hots for these Club Dances, bettah give her a jingle for more info before they close the registration for the workshop. Left click on accompanying poster to zoom in. You can also get a Registration Form by contacting Carolyn via e-mail. One more important thing; you gotta have the recommended level of dance experience before you enroll.
Posted by Frank at Tuesday, May 17, 2011

Must Be The Drinking Water 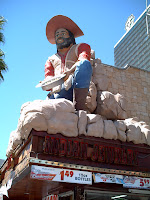 Lani and I just got back from Las Vegas and I gotta tell you...people don't sleep in that town. Not since my college days cramming for the next day's exam in the wee hours of the night and early morning that I saw people.. a whole bunch...are in the streets, in the hotels at the game tables and machines, and in cars way pass the midnight gong. We stayed in downtown at the California Hotel and there were lots to see, especially at the Fremont Street Experience. 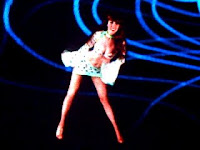 GOGO Dancers on the large screen above and Hip Hoppers dancing near the stage. They got the largest video screen about 60 feet high overhead that stretches for three long city blocks with a terrific Video Light Show goin' on every hour from 8 at night. 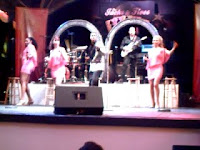 Three stages of musical talent provided the entertainment and never ending music to hype the crowd into dancing. 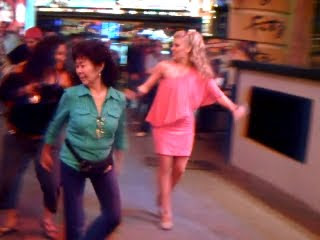 Even got my main squeeze Lani to dance the Electric Slide with some of the crowd. Got me in a spell, too, another night. Didn't think it could be done, but Gail Kawahakui and I got spellbound and danced the Salsa Merengue to Hip Hop music. 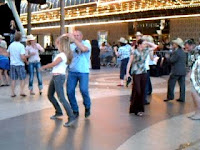 It must've been Western Night at the other side of the Street 'cause guys and gals in western garb were dancing some kind of cowboy swing. 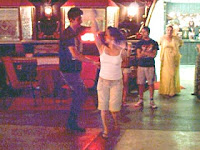 And some distance down the Street Salsa dancers were cutting some great moves. 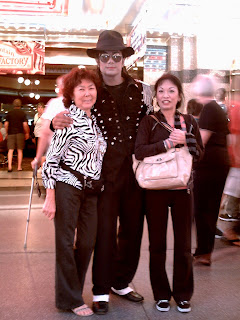 A lot of big screen impersonators, and Marvel SuperHeroes roamed the Street. Of course the "King of Pop" was a big attraction for Lani and Gayle. 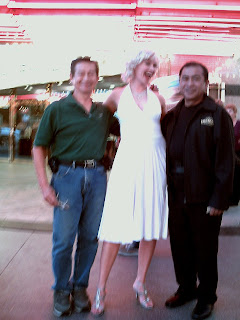 Reggie and I got a take with a "Marilyn Monroe" but I think she got tickled and we all moved out of focus. AUWE! I think what drew the biggest attraction was a gal with boobs that could choke an elephant.
One night, Richard and Lynn Nakamura took Lani and me, and Robert and Vanelle out to the Strip for a joy ride. Again more people in the streets, in the hotels at the game tables and machines, and in cars. People are all over the place...must be the drinking water that's keeping them bright eyed and bushy tail. Kalumongai soup used to do that to me when I was growing up on the plantation. Now don't go looking for that popular Filipino greens at the nearest supermarket 'cause you not goin' find any there. You can only find those greens in the backyard of a Filipino family house. But with a big Rothwieler roaming the yard, bettah stick to the drinking water. 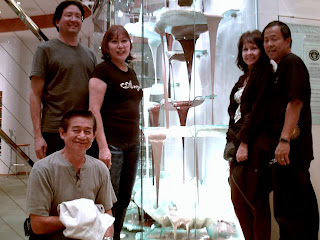 Richard and Lynn took us to Ceasar's Palace and the Bellagio. Richard, Robert and I kinda hammed it with the replica of boxing great Joe Louis just for fun. 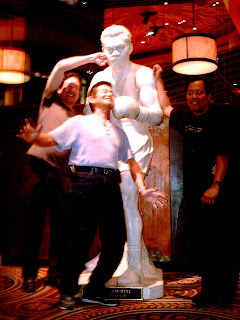 Lani and I never walked so much since treking the Great Wall of China back in 2001. Even in China, people never sleep. Must be the drinking water, again. Anyway, we went further away from the Strip to a hotel with the funny name, "M". Herbert Omizo told me about the place and how far away from town it was...no walking distance fo' sure. Lani and I were in Vegas since Tuesday and never so much as got the temptation to participate in the sporting game of gambling at least not until we got to "M" Hotel on Wednesday night. Yeah! Lani and I got our first lesson on the "One Arm Bandit". But it was no longer the "One Arm". Everything was "push da button", now, and see the bright colors and numbers roll. Was it fun? Well, we didn't leave "M" until after 2AM. The fever of the sport got to us the rest of our stay in Vegas. The temperature rose to 92 degress, we got thirsty and we drank a lot of water. Now, I guess we'll be making the pilgrimage to Vegas each year to visit our money fo' sure. It's no wonder that a gallon of pure drinking water sells for a buck ninety nine in Vegas.
Posted by Frank at Sunday, May 15, 2011