A Quick Look on The Wasabi for January

The WASABI Band still on fire and blazing through the month of January 2012. Get a load of Doreen's e-mail.
(No forget to left click mouse to zoom in)

Okay, Line Dancers, here's your calling to shine and slap those boots before saying adios to 2011. Friend Sandy Zook has got the Palladium locked in this Friday (Dec. 30) 9AM to 2:30PM for Beginners to Intermediate Line Dancing. See her e-mail for more info. 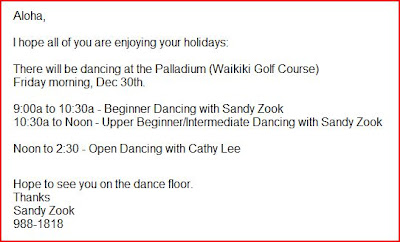 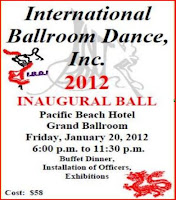 Aloha Students of Dance,
If you are holding tickets to the IBDI New Years Dance at the Pacific Beach Hotel for this coming Saturday, you gotta be the lucky ones. I'm not sure if there are anymore tickets floating around at this late date but you can try contact any IBDI member. If not successful, then there is still time to get on board for the IBDI Inaugural Ball at the Pacific Beach on January 20, 2012. Scan over Lynn Nakamura's e-mail that follows or bettah yet...contact her for tickets.............

Well, another year is almost pau and it's time to wish everyone "Hau'oli Makahiki Hou" and good health for the coming new year. Also a time to start crafting a new year resolution. It's been a whirlwind 2011 for Lani and me. We've met many new faces who have become our friends (we hope they regard us as their friends also) during our journey to promote ballroom dancing. I was in deep thoughts while scrounging for a genuine resolution for 2012 but then I began thinking...hey! we had fun in 2011 and if it ain't broke, no need to fix it. The new year is a good time to think about the naughty things (couldn't think of any at this time) and all the nice things we did during the past year. Now, Lani and I gotta trust we have the strength to continue to do all the nice things and still have fun in 2012.
Posted by Frank at Wednesday, December 28, 2011

Ringing In The New Year with Divino Ritmo

Aloha Students of Dance,
Divino Ritmo is welcoming the New Year with their year-end Social Dance at the Cupola this Tuesday. Good time to say farewell to the Rabbit and get in tune with the mighty Dragon. There's more thunder coming from my friend Marie Laderta. So read on--------
(left click to zoom in) 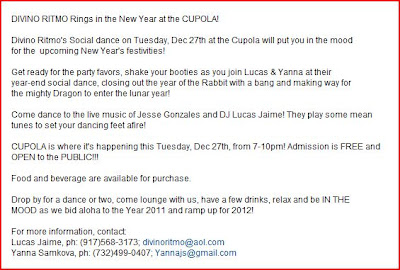 Aloha Students of Dance. If you are or planning to be on the Valley Isle on December 21, you might want to contact Dance Professional Rita O'Connor for more info on the Starlight Dance Party and the Christmas Morning Special. (see e-mail address and phone number at end of this blog) Photos by Aloha Ballroom Dance Academy. 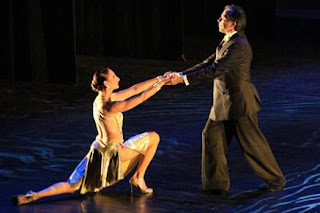 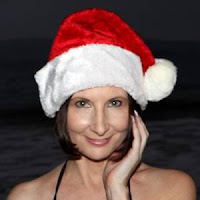 Maui, Hawaii –Aloha Ballroom Dance Academy hosts an evening with Dance Professional, Rita O'Connor and a FREE night of dance classes in Salsa & Quickstep starting at 6:30 pm on Wednesday, December 21, 2011. The "Starlight Dance" after-party starts at 8:00 pm saying "good-bye" to 2011 and "hello" to the upcoming arrival of 2012! The entire evening is FREE and open to the adult community!

This gala evening event at the Kihei Community Center is a pupu potluck and everyone's encouraged to participate! You don't need to dress up, but if you'd like to be in festive-wear, please feel free to do so! The educational 501(c)(3) charitable non-profit dance school welcomes outside financial donations to continue to support their efforts to bring professional instruction in partnership dancing to the island of Maui. Mayor Alan Arakawa previously commented: "it's always a treat to learn about another success story in our community - [the Academy] is clearly a testament to the enjoyment your students must find in the Ballroom dancing experience. My congratulations on your accomplishment...!"

Maui, Hawaii – As part of Aloha Ballroom Dance Academy's yearlong charitable mission, the non-profit annually hosts a drive for wrapped gifts which are donated to the Ka Hale A Ke Ola and Na Hale O Wainee Homeless Resource Centers so that the children can wake up to the magic of the holiday season! Academy Dance Professional, Rita O'Connor remarks “that for the past ten years, the Academy has provided every needy child at the Homeless Shelter(s) with a gift from Santa.” If anyone from the Maui community would like to make a donation of a wrapped gift for a child at the Homeless Resource Centers, they may bring them to the Kihei Community Center on Wednesday evenings through December 21st.
For more information about the Aloha Ballroom Dance Academy or the “December 21st Holiday Dance Classs & Party,” email ritaoc@hawaii.rr.com or call 879-0055 or visit their website at www.AlohaBallroom.com.
Posted by Frank at Tuesday, December 13, 2011

Hey all you fans of good ole rock your socks off dance music by the likes of Little Richard, Jerry Lee Lewis, & Elvis...if you missed seeing Garry's performance with us at Dot's in Wahiawa bcz it was too far a drive for ya, now's your chance! You must've all heard by now that Garry really rocked that stage at Dot's, and the energy was running HIGH that night. Well, here is another opportunity for you to catch Garry in action as he will be stopping by St. Louis Alumni this coming Thursday, December 8th, to grace us with his presence on stage! BTW, it's Garry's birthday that day, and he'll be celebrating with his family, but he's kind enough to share his day with us, so let's all show him the LOVE!!!

P.S. NO FORGET, WE'LL BE AT DOT'S IN WAHIAWA AGAIN THIS COMING SATURDAY, DECEMBER 10, TOO! This venue is getting to be THE HOT SPOT in Central Oahu, and we love it! Tell one & all to join us there, too!
Posted by Frank at Tuesday, December 06, 2011 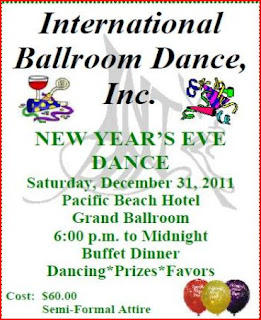 Just a quick reminder of IBDI events for this month and in January. No forget the IBDI Christmas Dance at the Palladium on Saturday December 17 also. Thanks to Nancy Shen and Marsh Ninomiya for sending the info. You might want to surf over to Dance Magic 808 Website for info on an upcoming Dance Workshop in December sponsored by IBDI, too.  Good bio on the dance teacher by Lynn Nakamura. 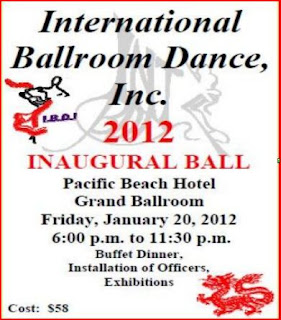